Interview with the Archduke Andreas Salvador Habsburg Loringen about the story of his family and his commitment to ITKI. 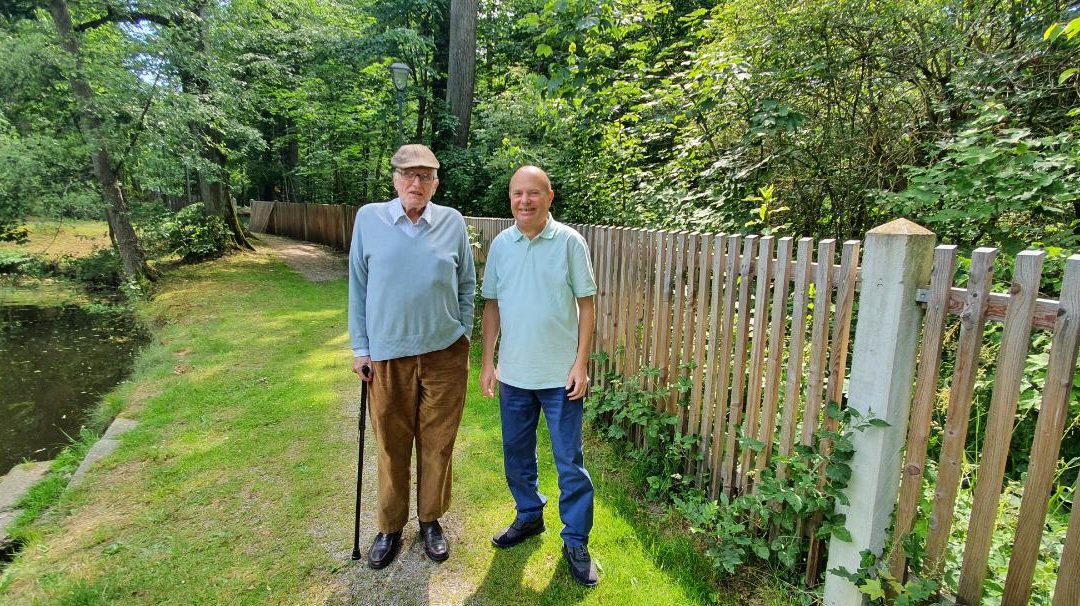 Archduke Andreas Salvador Habsburg Loringen, descendant of the Imperial Habsburg family, said that the number of family members does not exceed 250 now distributed – without authorities, positions or royal titles – in Austria, Hungary, Germany and Spain.

He stated that the Habsburg family, which ruled the Austro-Hungarian Empire for four centuries, did not become extinct, but its members are now ordinary citizens living in their own property that they inherited from their ancestors.

Archduke Andreas was speaking in a very rare meeting with the “Iris Media” agency in a castle he inherited from his father in the city of “Gmund” on the Austrian-Czech border.

The castle is surrounded by trees with history, statues that tell stories, and streams of water flowing between the borders of the two countries, separated by a wooden wall no more than one meter high.

The Archduke welcomed Dr. Jamal al-Majayda, with his calm voice full of emotion and nostalgia for royal memories of the days when his “Habsburg” family ruled Austria-Hungary, and he took me inside the castle, where he lived alone for years.

His three sons, two of them working in Vienna in the field of technology and a daughter studying music in Spain, while his wife lives in the Austrian capital.

Inside his apartment hang portraits of the founding Emperor Joseph, emperors, princesses and princes, all of which are original oil paintings drawn by Renaissance artists. The value of these paintings is estimated at tens of millions of dollars at the present time.

Andreas owns in his apartment, which also includes a church decorated with paintings and original statues, many decorations, medals, royal memorabilia, letters exchanged between the kings of the family, gifts, carpets, and valuable antiques, to the extent that I thought I was wandering in a historical museum and not in an apartment.

We went to the castle’s garden, which is truly very splendid and beautiful, with statues of the empress, his grandmother, and another statue of his mother in the middle.

After that tour, we headed to a nearby restaurant overlooking green mountains and valleys. We had lunch, which consisted of authentic Austrian dishes, which is “chicken schnitzel with potatoes” and drinks from local fruits. The Archduke is still working and walking and loving life!

“I was born in Bersenbyog Castle,” says Andreas. The residence of my father, the last emperor of Austria, and at the age of 16 I travelled with some of my family members to Spain under the royal family in Madrid, and I resided in Spain for 55 years before returning to Austria.

He holds Spanish citizenship, educated in Spain, and does not forget the credit of the Spanish royal family, which embraced him in the most difficult circumstances following the collapse of the Austrian Empire.

Archduke Andreas tells us, “In the 1919 negotiations between the elected Republic of Austria and the imperial and royal family, Archduke Hubert Salvatore, son of Archduke Marie Valery, daughter of Emperor Franz Joseph, and even the famous Emperor Elizabeth known as Sisi, chose to stay in Hungary. In the land of his ancestors.

But he is greatly influenced by the talk about the reasons for the collapse of the Austro-Hungarian Empire and its disintegration in Germany after the First World War. He says that one of the goals of the war is the dismantling of the empire, which was the strongest in Europe, and the establishment of elected parliamentary republic systems in the countries that won the war.

Andreas says that the imperial Habsburg family,dominated Europe but the end of World War 1 ended almost the whole dynasty.

I asked him if he had any surviving family members. He said, “There are currently about 250 members of the Habsburg family scattered in Austria, Germany and Hungary, but the communication between us is weak due to political considerations imposed on us by European countries.”

At the age of seventeen, he joined the university in Spain, where he finished his academic studies, to begin his career in Madrid, Spain, in the field of banking, the National Industry Institute, the Ministry of Agriculture and the Continental Water Sector. He attended training in freshwater aquaculture in Auburn, Alabama, USA. He is a charter member of the International Astaological Association (IAA) founded in Baton Rouge, Louisiana, USA.

For 35 years, Archduke Andreas led the International Order of Saint Hubert throughout the world and established, among others, the branch in Spain and Romania.

Join the active Maria Nobrega Ampla Foundation in Florence, Italy. He also founded the International Institute for Traditional Knowledge of Austria (ITKI). As such he specializes in “rain harvesting” and storing water that falls to the ground. In cooperation with UNESCO and IPOGEA, ITKI organized a symposium on “Landscape Heritage of Ponds”.

Reasons for the disintegration of the empire

On June 28, 1914, Franz Ferdinand, Crown Prince of the Austrian Empire, and his wife Sophie were assassinated by Serbian nationalist Gavrilo Princip. This incident, which occurred on the “Latin Bridge in the Bosnian capital Sarajevo, was the direct cause of the outbreak of the Great War and the entry of the world into a new era.

A month after the assassination of the Austrian Crown Prince, the Austro-Hungarian Empire declared war on the Kingdom of Serbia (28 July 1914), and the German Empire took advantage of this opportunity and declared war on its Russian counterpart. At the same time, France, which was not a party, declared war on Belgium, the United Kingdom invaded Germany on August 4, 1914, while Italy declared a position of neutrality.

The most notable result of the World War was first, the collapse of four empires (Austro-Hungarian, Russian, Ottoman and German), where Hungary separated from Austria, Czechoslovakia, Serbia, Croatia and Slovenia were established, and the Turkish Republic was established as a result of the collapse of the Ottoman Empire, and Germany lost many of its colonies, which it controlled before the start of the war.

The conflict lasted more than four years and spread to all regions of the world. At the end of it, Europe was exhausted, with ten million dead and twenty million wounded fighters, and millions of civilians killed by battles, starvation, disease or bloody turmoil that continued to shake Europe from Poland to Turkey through Russia and Hungary until 1923.

Link to the original page: